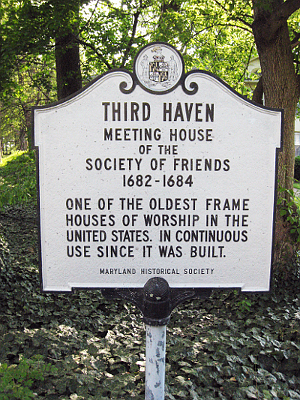 Third Haven Friends Meeting has occupied the same property since 1682, when three acres of land were purchased from John Edmondson for the purpose of building a meeting house. The original meeting house was completed and first put to use in 1684. It is still in active use and remains the focal point of the property. It is reputed to be the oldest frame worship place in the United States. This structure has been modified and other buildings added over the years.

Made of local hardwoods hewn on site, the original building was a simple rectangle with a central entranceway jutting out from the western exposure and a smaller extension on the east side, purpose unknown. Access to the property back then was solely by water. The property for the lane was not purchased until 1789, while the additional four acres were not acquired until the 1940's.

The Meeting House was dramatically changed in 1797, when a 12-foot extension was added along the western side, resulting in the asymmetrical roofline we see today. At that time, the main entrance was moved to the southern exposure. It may have been around that time that the wooden dividers, formerly used to separate the central room into a men's half and a women's half for business meetings, were added.

In 1990 this meeting house, suffering from termite damage and other signs of decay, underwent a major renovation with the help and guidance of the Maryland Historical Trust. Most visibly, the building was raised off the ground to accommodate a brick foundation which will protect it from further damage. For the most part, this building looks much as it did over three centuries ago.

The peaceful burial grounds have been in continuous use since the late 17th century, although it was not until over a century later that use of grave markers began. The markers are generally small and similar in shape, with limited information on them. Today over 177 graves have been identified, the earliest of which dates to c1790. A map of the burial grounds is available for those doing genealogical research. Further information can be found in our minutes, kept at the Maryland Hall of Records in Annapolis. In recent decades, Friends have tended to choose cremation over burial; hence the growing number of memorial plaques affixed to the brick wall along the western perimeter of the property. 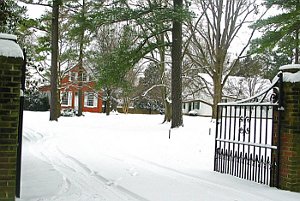 The brick meeting house was built in 1880 in a rather austere version of the late Greek Revival style. Graced with beautiful natural lighting and rich wood tones in the interior, it continues to serve the community during the cooler months of the year. (Unlike the Old Meeting House, this building has conveniences such as electricity, heat and plumbing.) First Day School classrooms are on the spacious second floor. 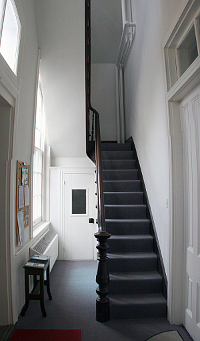 The Common Room, the building behind the brick meeting house in the southwest corner of the property, was built in 1982 to accommodate the many activities of members and the wider community. Complete with kitchen facilities, it is used both for committee meetings, social events, receptions, and for other community events in which Third Haven members are involved... or by organizations whose purposes align with our own.

Three other structures stand on the property: "Annie's Cottage," built in the 1860's and now used for a workshop and storage; a two-bedroom caretaker's cottage (1958) presently occupied by our resident caretaker; and an open storage shed built in the style of the old carriage shed which stood for many years on the property. The property additionally includes many fine species of trees and shrubbery.

We are grateful to be stewards of a very special property, one which enhances our worship and community experiences.

Meetings for Worship with Attention to Business: 2nd Sunday of the Month following Meeting for Worship (except for the months of July and August)